From Xenbase
Jump to: navigation, search

A protocol for chemical detection of heme containing proteins, useful for detecting blood in wholemounts. Submitted by Jerry Thomsen [1].

Benzidine is a reagent that forms a blue precipitate upon oxidation by the heme group of hemoglobin in the presence of hydrogen peroxide. Thus it serves as a histochemical stain specific for differentiated red blood cells. The figure is from A. Hemmatti-Brivanlou and G.H. Thomsen (1995). Ventral mesodermal patterning in Xenopus embryos: expression patterns and actvities of BMP-2 and BMP-4. Devl. Genet. 17: 78-89. [2]

Start reaction by addition of hydrogen peroxide to a final concentration of 0.3%. Incubate at RT (22 deg C). Color should develop within 10-15 minutes.

The blue precipitate is unstable in the presence of peroxide, and the peroxide will also gradually destroy the specimens.

Peroxide can be washed out with 12% acetic acid and fixed in methanol to stablize the precipitate, but the color will turn brown and lose intensity.

Protocol is adapted from Orkin S.H., Harosi, F.L. and Leder (1975): Differentiation of erythroleukemic cells and their somatic hybrids. 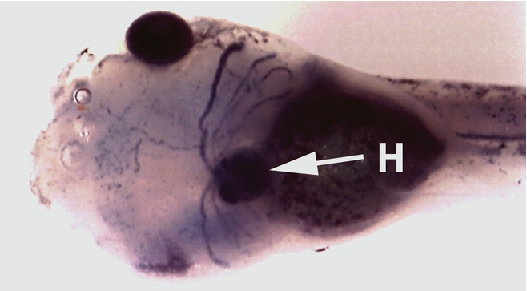