From Xenbase
Jump to: navigation, search

A combination of standard BM purple staining along with a FITC-tyramide or Cy3-tyramide counterstain. The purple precipitate will mask the fluorescence, and the masking shows where your expression is located. For example, compare the images of kidneys stained with XAA1, which is only active in a tiny part of the pronephros. On its own this would be difficult to interpret. The middle panel shows a general pronephric FISH counterstain (sodium potassium ATPase), and the right panel an overlay. Click on the images to enlarge. From the FCIS image the localized pronephric expression is very obvious.

FCIS has the advantage that it works with a stereoscope and standard reagents. 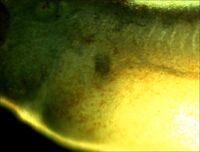 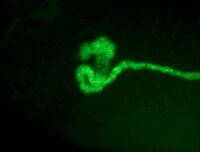 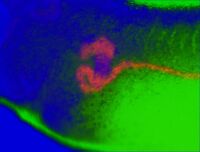 As the images show, the purple and fluorescent images can be effectively overlayed to highlight regions of expression and co-expression. Strong expression of the BM purple appears blue, weaker and overlapping expression pink, and FITC only orange.

In the antibody step incubate both AP coupled anti-DIG (Roche) plus HRP coupled anti-FITC (Roche) together (if you used DNP in your RNA, use anti-DNP-HRP, Perkin-Elmer). Wash out antibodies and develop standard BM purple color for as long as you want. Rinse, then develop the tyramide counterstain as described from point 5 onwards. Following a nice long wash (2 days) photograph separately using both reflected light and fluorescence.